Last Wednesday I was invited by BBC Gardeners’ World to an end of term bash at the Garden Media Guild Awards. All very nice, and I was a finalist in the awards too, with a portfolio of eight images published over the  last 12 months. 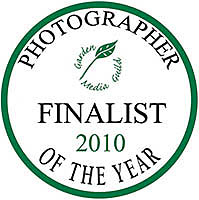 Along with the award ceremony, which was held at the Brewery in Chiswell Street, there was a three course meal. This included a desert that baffled James Alexander Sinclair, who happened to be sitting at the same table. I hadn’t heard of a Blackberry Tendance either.

I wouldn’t normally go on about a lunch, but I was quite curious about the goody bag that one often gets presented with at large events. As a car photographer I  was lucky enough to travel all over Europe, the US and  Japan, where you would frequently be presented with mementos relating to a particular country – wine, pens, model cars, books and T-shirts to name but a few. But never an axe! It’s a very fine axe too. I sat on the tube rehearsing my statement to the police all the way home!